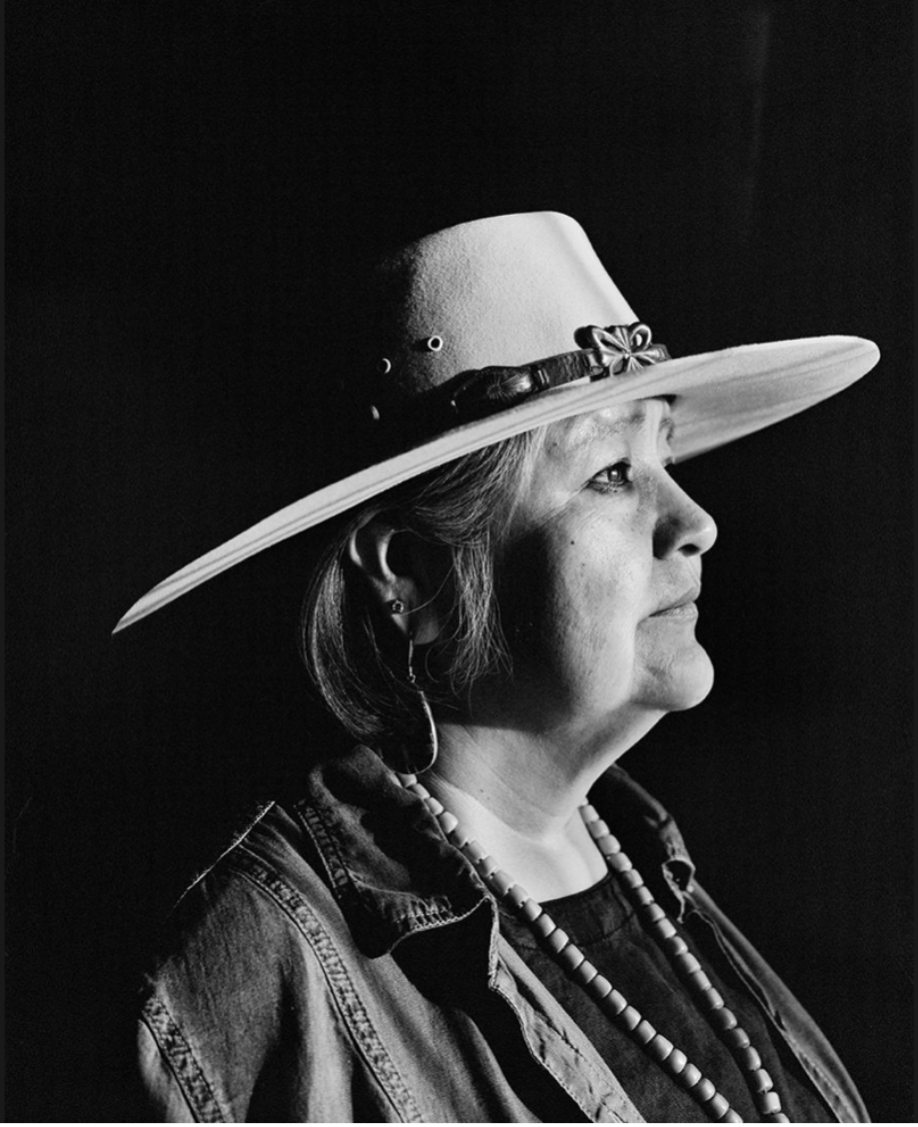 Life offers no guarantees of safe harbor and no promise of freedom from pain and suffering. But beauty, harmony, and a measure of grace do exist, and perhaps we should all try to cultivate those qualities. In Diné (Navajo) philosophy, hózhó is a complex set of principles to guide one’s actions, thoughts, and speech for the purpose of maintaining wellness and balance. The best way to approach and appreciate the work of artist Melanie Yazzie is from such a perspective, which enables a person to see beyond a facile reading of her art — as expressions of a lightness of being — to its deeper philosophy.

“I think a lot of people see my work and write it off as — it’s almost annoying to me when people say, ‘Oh, it’s so whimsical.’ I’m just thinking that there’s so much more to all of this,” she said. “There are layers of colors and layers of meaning. It carries a strength that helps me cope with the difficult things in life.”

Yazzie, head of printmaking at the University of Colorado - Boulder, has an extensive exhibition of paintings and works on paper, along with a few examples of her sculpture, opening at the Wheelwright Museum of the American Indian on Sunday, May 13. The show, Memory Weaving, opens in conjunction with Peshlakai Visions, an exhibit of works by master Navajo silversmith Norbert Peshlakai. Peshlakai’s exhibit includes over one hundred pieces of jewelry and small sculpture. He is known for his expert stamp work of symbolic imagery, people, and animal forms, some of which are related to his Navajo heritage and some of which, like his recurring stamped character “Cowboy Slim,” are unique creations. He takes a nontraditional approach to imagery and forms.

Yazzie’s show is a deeply personal set of images, most of which straddle a line between abstraction and representationalism. This work is rooted in her Diné outlook and heritage. Yazzie, a prolific and seemingly tireless artist, was born in Ganado, Arizona, an administrative seat of the Navajo Nation. From an early age, she was steeped in certain aspects of her culture that she continues to express in her art. “I spent a lot of time when I was really young with my mom’s side of the family — my grandmother Thelma Baldwin and my grandfather Tom Baldwin. It’s really based in that early childhood time with them that grounds a lot of my studio practice and my outlook on things,” she said. “Both of my grandmothers were traditional rug weavers. Thelma Baldwin, from the Wide Ruins area, was the more well-known weaver.”

Yazzie’s imagery includes recurring motifs of abstracted animal and plant forms, as well as of people — notably women — who are rendered in a spectrum of colors that seem to be inspired by elements of earth and sky. Her works give an overall sense of being expressionistic rather than clearly narrative. But memory, as the title suggests, is key: impressions from a childhood spent smelling her grandmother’s cooking, for instance, or the early morning light from when her grandfather arose to tend to his sheep. “They mostly spoke Navajo and didn’t really speak English, and that really grounded my understanding of home,” she said.

Part of her intent as an artist is to express aspects that are personal and cultural without betraying devotion to Diné ideals. She seeks and finds a means of bringing her heritage into her work in way that is respectful. While the work is always contemporary, it is in keeping with the Navajo worldview. There remains an edict that certain visual forms, particularly those that are held to be sacred in Navajo religion, must be respected and approached in a manner that is in accord with societal norms. “My grandmother would always talk about how sand paintings and different imagery from home for ceremonial things is very important, and should be kept in that sacred space,” she said. “In her own way, she explained that those were for special times. I think, from a very young age, I learned that I did not want to use that imagery in my work. I have references to things from home that represent those special, sacred things, but I’m not using things directly that are traditional. I’ve abstracted my drawings and my work to touch on those ideas. I quickly learned that what I was going to make would be very different and not to cross those boundaries.”

As an undergraduate at Arizona State University and then in grad school at CU - Boulder, she engaged in research about the troubled history of Navajo people and other indigenous cultures in the United States. She previously brought a dark, confrontational edge into her artwork that explored those themes. “I think what happened a lot with me was that it was hard for me to live with that research and that reality and anger all the time. I found, a lot of times, that — there’s that whole term ‘preaching to the choir’ — I was talking to people who believed and understood where I was coming from, but the people who really needed to hear the stories, when they saw the work, they were sort of turned off by all the history.”

By taking a less confrontational approach, she was able to open up lines of dialogue. “I realized that with the work that brought joy, that had different elements of the beauty in the world, I could use it almost like the honey to bring people in, and then I could share stories about who we are and where we’re coming from, and people were more open to learning and listening, as opposed to something that was more in your face, shouting about what’s happened to our people.”

Many of the works on view are compositions in which representational forms, sometimes depicted in silhouette, seem to float, not grounded or moored to landscapes. They give the impression of memories that are loose and intermingling in the mind. In several more recent works, such as Wondering, Keeping Positive, and Keeping Time, numbers appear throughout that seem to be random but reflect Yazzie’s ongoing engagement with monitoring illness. “A lot of the work has been reflecting my path, being a Type II diabetic and living with that, living with testing my blood sugar and counting what my blood sugar levels are and my A1C levels,” she said. “Those numbers show up in the artwork.”

As for the silhouettes of women, their forms are sometimes rendered as linear shapes without facial or other realistic details, colored with the hues of the background or surrounding tones as though they are transparent. Much of Yazzie’s work has this translucent quality, which is often contrasted with brilliant shades of color here and there that delineate organic forms. “The women in the images are, in a sense, how I’m portraying myself to be a strong Navajo woman, a strong female figure,” she said. “I also put a female figure into the work because so much of our Native art has some crazy warrior on a horse, attacking or carrying a shield, and it’s very aggressive. Growing up, I always thought, Where are the women? Where is the other side of our community? In the Navajo community, it’s the women who lead. It’s a matrilineal society, and the women carry an important role. When I was making some of the works, I wanted that presence to be there.”

Yazzie’s prints and paintings may seem to break with the traditional visual culture of the Navajo. She, at times, has felt some pressure to work in common cultural mediums like sand painting — or weaving, specifically, since it was a family practice — until her grandmother reassured her that she already was. “I went to her when I was in grad school and asked her if I should be weaving. Should I be doing what you do? I feel like, at times, I’m not doing that. My grandmother Thelma said to my aunt — because my aunt had to translate — ‘You are weaving in this other way. You are weaving thoughts and ideas and doing it in this new way. I can’t do that. But in that way, you still are a Navajo woman who is a traditional weaver.’ For my grandmother to tell me, at a point where I was questioning why I made my work, that she understood it at such a deep level, put my mind at ease that I am a weaver.”